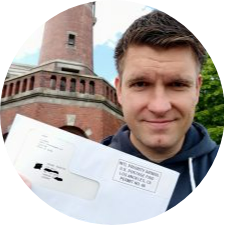 These are my personal book notes of The War of Art by the author Steven Pressfield.

Resistance hates it when we turn pro.
- Steven Pressfield

Do yourself a huge favor and get your hands on this book as soon as possible.

It has the potential to save your life, if you’re struggling with procrastination or other forms of resistance.

Steven writes about the biggest enemy we face in our life, daily: Resistance.

Are you facing procrastination?

This book is too important not to be read.

[…] I power down. It’s three, three-thirty. The office is closed. How many pages have I produced? I don’t care. Are they any good? I don’t even think about it.

All that matters is I’ve put in my time and hit it with all I’ve got.

All that counts is that, for this day, for this session, I have overcome Resistance.

There’s a secret that real writers know that wannabe writers don’t, and the secret is this:

It’s not the writing part that’s hard. What’s hard is sitting down to write.

What keeps us from sitting down is Resistance.

Most of us have two lives. The life we live, and the unlived life within us. Between the two stands Resistance.

Have you ever brought home a treadmill and let it gather dust in the attic?

Ever quit a diet, a course of yoga, a meditation practice?

Have you ever bailed out on a call to embark upon a spiritual practice, dedicate yourself to a humanitarian calling, commit your life to the service of others?

Have you ever wanted to be a mother, a doctor, an advocate for the weak and helpless; to run for office, crusade for the planet, campaign for world peace, or to preserve the environment?

Late at night have you experienced a vision of the person you might become, the work you could accomplish, the realized being you were meant to be?

Then you know what Resistance is.

Resistance is the most toxic force on the planet. It is the root of more unhappiness than poverty, disease, and erectile dysfunction.

Resistance is faster than a speeding bullet, more powerful than a locomotive, harder to kick than crack cocaine.

I looked everywhere for the enemy and failed to see it right in front of my face.

How many of us have become drunks and drug addicts, developed tumors and neuroses, succumbed to painkillers, gossip, and compulsive cell-phone use, simply because we don’t do that thing that our hearts, our inner genius, is calling us to?

If tomorrow morning by some stroke of magic every dazed and benighted soul woke up with the power to take the first step toward pursuing his or her dreams, every shrink in the directory would be out of business.

The alcohol and tobacco industries would collapse, along with the junk food, cosmetic surgery, and infotainment businesses, not to mention pharmaceutical companies, hospitals, and the medical profession from top to bottom.

Book One: Resistance – Defining the Enemy.

The following is a list, in no particular order, of those activities that most commonly elicit Resistance:

In other words, any act that rejects immediate gratification in favor of long-term growth, health, or integrity.

Or, expressed another way, any act that derives from our higher nature instead of our lower.

Any of these will elicit Resistance.

But it can be felt.

We experience it as an energy field radiating from a work-in-potential.

Its aim is to shove us away, distract us, prevent us from doing our work.

Resistance seems to come from outside ourselves.

We locate it in spouses, jobs, bosses, kids.

“Peripheral opponents,” as Pat Riley used to say when he coached the Los Angeles Lakers.

Resistance is not a peripheral opponent.

Resistance arises from within.

It is self-generated and self-perpetuated.

Resistance is the enemy within.

Resistance will tell you anything to keep you from doing your work.

It will reason with you like a lawyer or jam a nine-millimeter in your face like a stickup man.

Resistance has no conscience.

If you take Resistance at its word, you deserve everything you get.

Resistance is always lying and always full of shit.

Resistance Is Fueled By Fear

Resistance has no strength of its own.

Every ounce of juice it possesses comes from us.

We feed it with power by our fear of it.

Master that fear and we conquer Resistance.

Procrastination is the most common manifestation of Resistance because it’s the easiest to rationalize.

We don’t tell ourselves, “I’m never going to write my symphony.”

Instead we say, “I am going to write my symphony; I’m just going to start tomorrow.”

Resistance Can Be Beaten

If Resistance couldn’t be beaten, there would be no Fifth Symphony, no Romeo and Juliet, no Golden Gate Bridge.

It seems absolutely impossible until you remember that women have been pulling it off successfully, with support and without, for fifty million years.

It is one thing to study war and another to live the warrior’s life.
- Telamon of Arcadia

They have not yet turned pro.

The moment an artist turns pro is as epochal as the birth of his first child.

With one stroke, everything changes.

I can state absolutely that the term of my life can be divided into two parts: before turning pro, and after.

To be clear: When I say professional, I don’t mean doctors and lawyers, those of “the professions.”

I mean the Professional as an ideal.

The professional in contrast to the amateur.

The amateur plays for fun. The professional plays for keeps.

To the amateur, the game is his avocation. To the pro it’s his vocation.

The amateur is a weekend warrior. The professional is there seven days a week.

The word amateur comes from the Latin root meaning “to love.”

The conventional interpretation is that the amateur pursues his calling out of love, while the pro does it for money.

Not the way I see it.

In my view, the amateur does not love the game enough.

If he did, he would not pursue it as a sideline, distinct from his “real” vocation.

The professional loves it so much he dedicates his life to it.

That’s what I mean when I say turning pro.

Resistance hates it when we turn pro.

All of us are pros in one area: our jobs.

We get a paycheck. We work for money. We are professionals.

Now: Are there principles we can take from what we’re already successfully doing in our workaday lives and apply to our artistic aspirations?

What exactly are the qualities that define us as professionals?

Now consider the amateur: the aspiring painter, the wannabe playwright.

How does he pursue his calling?

One, he doesn’t show up every day.

Two, he doesn’t show up no matter what.

Three, he doesn’t stay on the job all day.

He is not committed over the long haul; the stakes for him are illusory and fake.

He does not get money.

And he overidentifies with his art.

He does not have a sense of humor about failure.

You don’t hear him bitching, “This fucking trilogy is killing me!”

Instead, he doesn’t write his trilogy at all.

For Love Of The Game

To clarify a point about professionalism:

The professional, though he accepts money, does his work out of love.

He has to love it.

Otherwise he wouldn’t devote his life to it of his own free will.

There’s no mystery to turning pro.

It’s a decision brought about by an act of will.

We make up our minds to view ourselves as pros and we do it. Simple as that.

Are you a born writer? Were you put on earth to be a painter, a scientist, an apostle of peace?

In the end, the question can only be answered by action.

It may help to think of it this way:

If you were meant to cure cancer or write a symphony or crack cold fusion and you don’t do it, you not only hurt yourself, even destroy yourself. You hurt your children. You hurt me. You hurt the planet.

You shame the angels who watch over you and you spite the Almighty, who created you and only you with your unique gifts, for the sole purpose of nudging the human race one millimeter farther along its path back to God.

Creative work is not a selfish act or a bid for attention on the part of the actor.

It’s a gift to the world and every being in it.

Don’t cheat us of your contribution.

Give us what you’ve got.

This concludes my personal book notes of The War of Art by Steven Pressfield.

As you can see from the table of contents, my personal book notes only cover small parts of this book.

If you like what your read, please consider buying the book from the author.

It’s not the writing part that’s hard. What’s hard is sitting down to write.
- Steven Pressfield